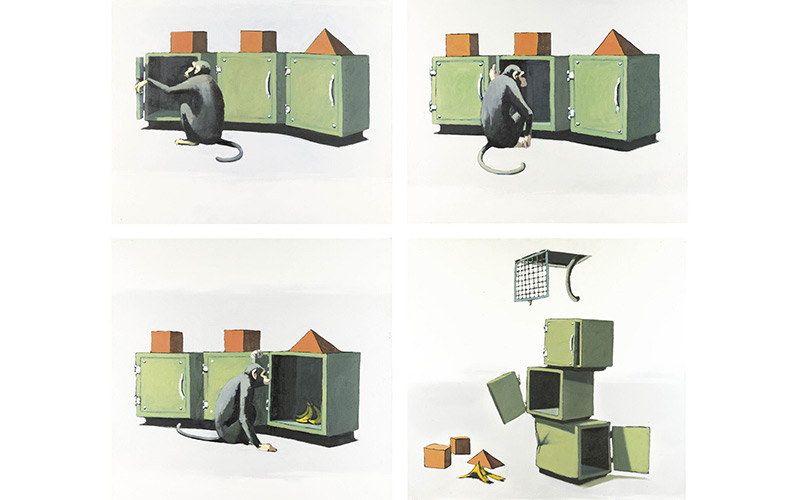 Simple Intelligence Testing consists of four oil paintings on canvas and cardboard that tell the coherent story of a chimpanzee whose intelligence is being tested. He has to find out which cabinet contains bananas by looking at the geometric figures above them. After the chimpanzee has opened all the cupboards and discovered the bananas, he stacks the cubicles on top of each other and escapes from the test laboratory via the ventilation opening in the ceiling. All that is left of the fruit are the peels.

Monkey depictions occur frequently and in different ways in Banksy’s work. Images often play a role in political disputes with the British Parliament or, as shown here, the monkey as a laboratory animal that is underestimated by humans. In earlier art history, monkeys were connoted with low morals, imitating an ideal in a vulgar way, or they stood as a symbol of sin. A thoughtless imitation was attributed to them and they served as a projection screen for basic human questions. In contemporary art, the monkey remains an important motif that speaks to the animal side of humanity and questions humanity’s superiority over nature. 2008 Simple Intelligence Testing was sold for USD 1,093,400 during an auction at Sotheby’s in London.