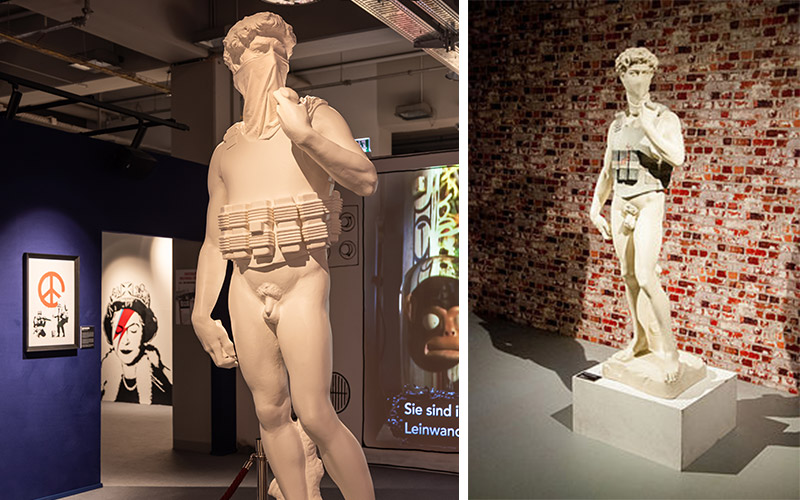 The Suicide Bomber represents an adaptation of Michelangelo’s David figure as a suicide bomber and was exhibited in the entrance hall of the Bristol Museum in 2009. The Banksy vs Bristol Museum exhibition was one of Banksy’s larger shows and featured more than 100 artworks, including animatronics and installations. Over the course of twelve weeks it was visited over 300,000 times.

The statue of David is a masterpiece of Renaissance sculpture, created in marble by Italian artist Michelangelo between 1501 and 1504, and is symbolic of freedom and strength. The sculpture depicts the biblical David at the moment when he has already placed the slingshot on his shoulder and takes up the fight against the giant Goliath. The figure shows an athletic male nude in classical contrapposto. The entire weight rests on his right leg, shifting the hip to the right. Head and gaze are directed to the left. In his right hand David holds a stone, with his left he casually throws the sling over his shoulder. Detail shots of the head show oversized, wide-open eyes, a furrowed brow and drawn-together eyebrows. The moment before the action is depicted.

Banksy’s version is an exact replica of the David statue – but with an explosive waistcoat and a cloth in front of his face. As in other works with art historical sculptures, Banksy transforms a classic work into a contemporary piece and questions the glorification of war.