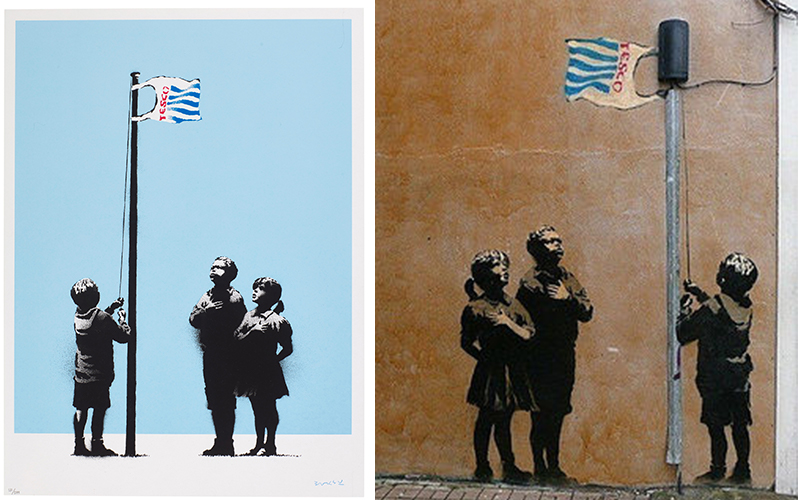 Against a background of soothing pastel blue, children in black and white show their allegiance to the Tesco flag, an emblem of modern consumerism, instead of the insignia of the country as an „imagined community“. The work is both ironic and real, showing how the contemporary nation state has less influence on culture than giant corporations.

Banksy ingeniously depicts the British supermarket chain Tesco and its customers in one of his best situational images. A cable duct becomes a flagpole, we seem to be witnessing a Scout flag ceremony, but with a Tesco shopping bag instead of the Union Jack. The Scouts, founded at the height of the British Empire, traditionally hold a flag ceremony („Flag Break“) at the beginning of important meetings; „The ceremony of ‚breaking‘ (i.e. unfurling and hoisting a flag on a flagpole) the Union Flag is a mark of respect and reminds us of our duty to the Queen and thus to our country,“ says the Scout Handbook. Interestingly, the hand-on-heart gesture comes from the US Pledge of Allegiance. It gives the image more emotional weight. Here, three traditionally dressed children pledge their allegiance to the supermarket. Our duty, Banksy admonishes, is now to consume; we have sired children who serve no higher purpose … no trace of queen or fatherland. For some, the author included, shopping at Tesco represents repugnant consumer terror – loyalty to this brand is mainly determined by its low prices. Amazingly, the somewhat patronising slogan „Every Little Helps“ has been in use since 1992; no wonder it has found its way into everyday language. Model Jerry Hall sold an authenticated canvas of this painting at Sotheby’s in 2010 for £82,850.