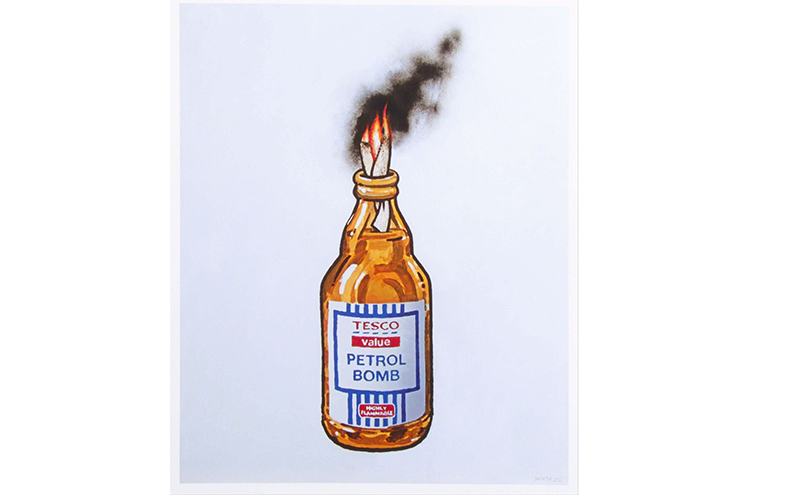 Tesco Value Petrol Bomb shows a burning Molotov cocktail in a brown bottle with a blue and white Tesco brand label. The neck of the bottle has a lit cloth in it. The label reads ‘petrol bomb’. Tesco is a British global low-cost supermarket chain and Britain’s largest retail chain. Worldwide, Tesco operates more than 6,800 supermarkets and employs more than 440,000 people. Banksy uses the Tesco motif in several works such as Discount Soup Can and Very Little Helps to highlight the company’s exploitative structures.

This Tesco variation was created as a sign of solidarity towards those arrested to the 2011 Bristol riots. In April, the local community protested the opening of a new Tesco Express store in Stokes Croft, led by the group ‘No Tesco In Stokes Croft’. Although most protesters were peaceful, there were isolated altercations, damage to property and arrests. Banksy produced several prints for sale and donated the profits to those who had to pay for legal aid. People were able to buy the posters at the ‘Anarchist Bookfair’ in Bristol.