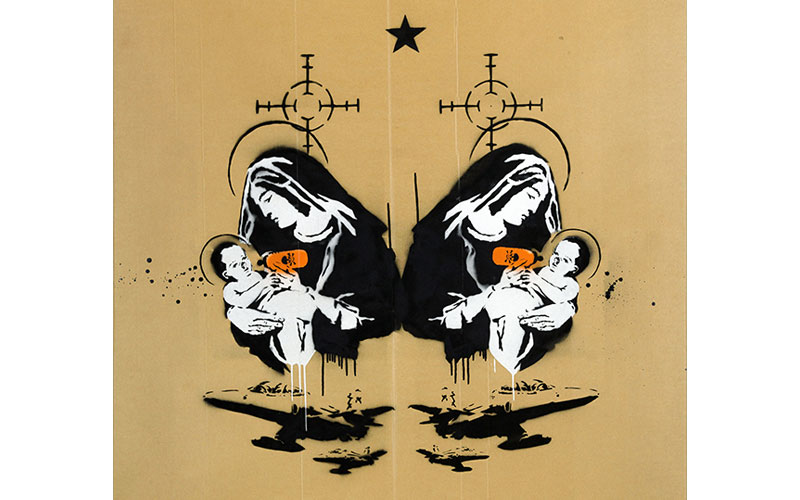 Toxic Mary (Double) is an extension of Toxic Mary, which was first shown as a painting at „Turf War“, the street artist’s first major exhibition, held in 2003 in an East London warehouse in Dalston. It is a classic depiction of the Madonna and Child, but as here, she is feeding the Christ child with an orange vial of toxic contents. In this variation, the artist has painted a reflection of the Virgin Mary and Child on a gold ground on a large canvas, creating a doubling effect. Crosshairs float above the heads of the Madonnas, a star hangs between them, and military planes fly away below them.

On the one hand, Banksy uses religious iconography to criticize mass consumption and capitalism, an example of which is Christ with Shopping Bags from 2004. On the other hand, he uses it to denounce Christian values and question their authority. The image of the holy mother feeding her child with poisonous food is extended with war themes and gives an association to religious wars. In religious wars, religion serves not only as a means of propaganda. Religious promises are used by the warring states to motivate their own people, especially the soldiers participating in the battle. Material casualties of war are equated with religious sacrifice, which results in a greater willingness to accept the losses.